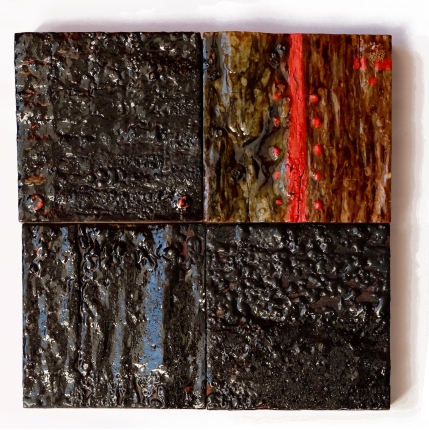 Ceramic material is related both with the hand’s movements and with scientific development, within the analysis of clay and silica based materials I am tracing a line which connects prehistory and present time. My research starts from the territory it self in the closest observation that bare eye allows and is developed through firing and glazing compositions.

The archetypical language that I express in my artistic ceramic production brought me next to the metamorphic rocks, a specific material which constitutes the panels holding the ancient carvings of the Côa Valley archeologic site in Portugal.

My research evolved from this specific material, slate. To have it in my laboratory was like having from the territory a sample of time witnessing hundreds thousands years. Similarities between stone and ceramic as facade of human shelters is a metaphor which allows reading of the surface it self.

Observing the development of natural oxides and the foliating tendency of the stone I proceeded with firing tests in oxidizing atmosphere. I brought plates of slate under the sun blinding light of the present by forcing it through various temperature in the electric kiln. Ceramic equipment and instruments are, by controlling temperature, forcing the time. What changes in million of years changes in hours in the kiln.

Slate, as metamorphic rock, continues its metamorphosis. Glazes hold the symbolic function which is intrinsic to the material. In fact, Iron Oxide, perhaps the most common ceramic glaze represents to me decay, consumption, a corroborative element with strong expansive force.

A combination of glazes starring red iron oxide among others allowed, through material expressions, a reasoning about ancient memory and the condition of our time, the dichotomy Pleistocene/ Anthropocene.

The link between contemporary and prehistory is an odd link which is needed to provoke imagination, critical sense and an urgent need of awareness.